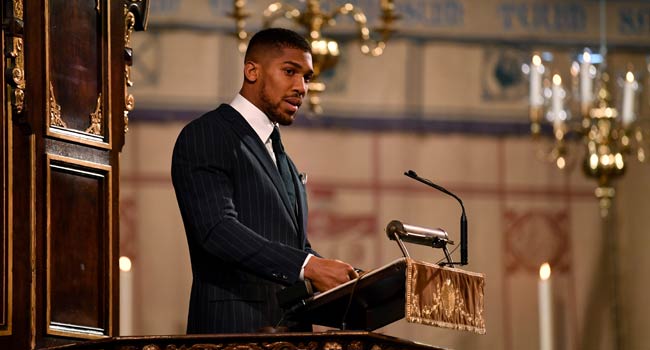 World heavyweight boxing champion, Anthony Joshua, has placed himself in self-isolation following a meeting with Prince Charles, who tested positive for coronavirus on Wednesday.

Charles, the eldest son, and heir to Britain’s Queen Elizabeth II, is showing mild symptoms of coronavirus and is self-isolating in Scotland, officials said on Wednesday.

It remains unclear when Charles caught the illness but on March 9, he spent the day with the Queen, prime minister Boris Johnson and stars of sport and entertainment – including Joshua – at the Commonwealth Day service at Westminster Abbey.

A spokesman for Joshua told the Daily Mail, “AJ is at home following government guidelines, he is fit and well. He wishes everyone affected a speedy recovery and a huge thank you to all the front line key workers.”

Joshua is due to defend his IBF, WBA and WBO heavyweight titles against mandatory challenger Kubrat Pulev at the Tottenham Hotspur Stadium on June 20.

But the coronavirus could delay that bout and push back a hugely anticipated all-British fight with WBC champion Tyson Fury until next year at the earliest.

In a series of Twitter posts on Tuesday, Joshua thanked all those involved in trying to combat the coronavirus by saying: “It’s humbling to see people giving their everything right now to keep us safe. Shout to everyone on the front-line.

“We see you, we appreciate you, we thank you and we’re in awe of you!”